He’s everywhere today! Noah was also on Ryan Seacrest’s radio show to chat about his projects. Watch and listen below! 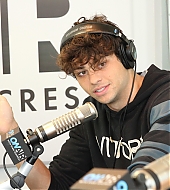 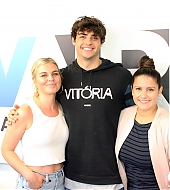 Peter Kavinsky IRL! To All the Boys I’ve Loved Before actor Noah Centineo stopped by On Air With Ryan Seacrest on Wednesday, September 5, and our crushes were ignited all over again. In case you haven’t caught the Netflix romantic comedy, Noah plays Peter Kavinsky, a high school cutie who ends up pretending to be 16-year-old Lara Jean’s boyfriend after her secret love letters are released and her love life goes from imaginary to out of control.

Centineo, who you may recognize from The Fosters, is from Boca Raton, Florida, and shared with Ryan that he first got started in the business by modeling for catalogs like Macy’s as a young child, but his big break has come with the success of the Netflix rom-com, which is based off Jenny Han’s 2014 novel of the same name.

“I was kind of an out of work actor and it was a job opportunity and I couldn’t say no,” Noah joked when asked how the film came to him. “But at the same time, once I got the script, you realize that this is a film about a girl that’s terrified to put herself out there and to love and it’s a coming-of-age tale about her really learning to trust someone and to open up and it’s a lovely tale and also is a film that works to normalize ambiguity in the industry, and nowadays, I think that’s really important to a lot of people and that’s lovely so I got really fortunate.”